This is really intended as a draft chapter for our book. Given the diverse natures of the intended intended audiences, it is probably a bit light on explanation of the Haskell (use of monad transformers) for those with a background in numerical methods. It is hoped that the explanation of the mathematics is adequate for those with a background in Haskell but not necessarily in numerical methods. As always, any feedback is gratefully accepted.

Imagine an insect, a grasshopper, trapped on the face of a clock which wants to visit each hour an equal number of times. However, there is a snag: it can only see the value of the hour it is on and the value of the hours immediately anti-clockwise and immediately clockwise. For example, if it is standing on 5 then it can see the 5, the 4, and the 6 but no others.

It can adopt the following strategy: toss a fair coin and move anti-clockwise for a head and move clockwise for a tail. Intuition tells us that over a large set of moves the grasshopper will visit each hour (approximately) the same number of times.

and the (conditional) probability that the grasshopper jumps to state

given it was in state

is a normalising constant (12 in this case) we obtain

This tells us that the required distribution is a fixed point of the grasshopper’s strategy. But does the strategy actually converge to the fixed point? Let us perform an experiment.

First we import some modules from hmatrix.

Let us use a clock with 5 hours to make the matrices sufficiently small to fit on one page.

We suppose the grasshopper starts at 1 o’clock.

If we allow the grasshopper to hop 1000 times then we see that it is equally likely to be found on any hour hand with a 20% probability.

In this particular case, the strategy does indeed converge.

Now suppose the grasshopper wants to visit each hour in proportion the value of the number on the hour. Lacking pen and paper (and indeed opposable thumbs), it decides to adopt the following strategy: toss a fair coin as in the previous strategy but only move if the number is larger than the one it is standing on; if, on the other hand, the number is smaller then choose a number at random from between 0 and 1 and move if this value is smaller than the ratio of the proposed hour and the hour on which it is standing otherwise stay put. For example, if the grasshopper is standing on 5 and gets a tail then it will move to 6 but if it gets a head then four fifths of the time it will move to 4 but one fifth of the time it will stay where it is.

Substituting in at 4 say 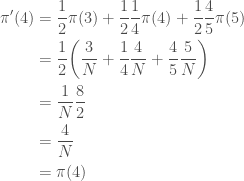 The reader can check that this relationship holds for all other hours. This tells us that the required distribution is a fixed point of the grasshopper’s strategy. But does this strategy actually converge to the fixed point?

Again, let us use a clock with 5 hours to make the matrices sufficiently small to fit on one page.

We suppose the grasshopper starts at 1 o’clock.

with a probability of

times the probability of being found on 1.

In this particular case, the strategy does indeed converge.

Surprisingly, this strategy produces the desired result and is known as the Metropolis Algorithm. What the grasshopper has done is to construct a (discrete) Markov Process which has a limiting distribution (the stationary distribution) with the desired feature: sampling from this process will result in each hour being sampled in proportion to its value.

Let us examine what is happening in a bit more detail.

The grasshopper has started with a very simple Markov Chain: one which jumps clockwise or anti-clockwise with equal probability and then modified it. But what is a Markov Chain?

We sometimes say that a Markov Chain is discrete time stochastic process with the above property.

So the very simple Markov Chain can be described by

The grasshopper knows that

so it can calculate

. This is important because now, without knowing

, the grasshopper can evaluate

takes the maximum of its arguments. Simplifying the above by substituing in the grasshopper’s probabilities and noting that

An irreducible, aperiodic and positive recurrent Markov chain has a unique stationary distribution.

Note that the last condition is required when the state space is infinite – see Skrikant‘s lecture notes for an example and also for a more formal definition of the theorem and its proof.

be a probability distribution on the state space

be an ergodic Markov chain on

(the latter condition is slightly stronger than it need be but we will not need fully general conditions).

takes the maximum of its arguments.

Calculate the value of interest on the state space e.g. the total magnetization for each step produced by this new chain.

Repeat a sufficiently large number of times and take the average. This gives the estimate of the value of interest.

Let us first note that the Markov chain produced by this algorithm almost trivially satisfies the detailed balance condition, for example,

Secondly since we have specified that

is ergodic then clearly

is also ergodic (all the transition probabilities are

So we know the algorithm will converge to the unique distribution we specified to provide estimates of values of interest.

For simplicity let us consider a model with two parameters and that we sample from either parameter with equal probability. In this sampler, We update the parameters in a single step.

The transition density kernel is then given by

is the Dirac delta function.

This sampling scheme satisifies the detailed balance condition. We have 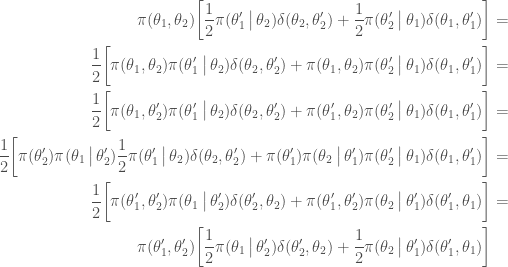 Hand waving slightly, we can see that this scheme satisfies the premises of the ergodic theorem and so we can conclude that there is a unique stationary distribution and

must be that distribution.

Most references on Gibbs sampling do not describe the random scan but instead something called a systematic scan.

Again for simplicity let us consider a model with two parameters. In this sampler, we update the parameters in two steps.

We observe that this is not time-homegeneous; at each step the transition matrix flips between the two transition matrices given by the individual steps. Thus although, as we show below, each individual transtion satisifies the detailed balance condition, we cannot apply the ergodic theorem as it only applies to time-homogeneous processes.

The transition density kernel is then given by

Suppose that we have two states

So again we have

Similarly we can show

and these are not necessarily equal.

So the detailed balance equation is not satisfied, another sign that we cannot appeal to the ergodic theorem.

An Example: The Bivariate Normal

Let us demonstrate the Gibbs sampler with a distribution which we actually know: the bivariate normal.

The conditional distributions are easily calculated to be

We pre-calculate the variance needed for the sampler.

In Haskell and in the random-fu package, sampling from probability distributions is implemented as a monad. We sample from the relevant normal distributions and keep the trajectory using a writer monad.

It is common to allow the chain to “burn in” so as to “forget” its starting position. We arbitrarily burn in for 10,000 steps.

We sample repeatedly from the sampler using the monadic form of iterate. Running the monadic stack is slightly noisy but nonetheless straightforward. We use mersenne-random-pure64 (albeit indirectly via random-source) as our source of entropy.

We can look at the trajectory of our sampler for various run lengths.

For bigger sample sizes, plotting the distribution sampled re-assures us that we are indeed sampling from a bivariate normal distribution as the theory predicted.

Some of what is here and here excluding JAGS and STAN (after all this is a book about Haskell).

Most of what is here.

One thought on “Gibbs Sampling in Haskell”