The intended audience of this article is someone who knows something about Machine Learning and Artifical Neural Networks (ANNs) in particular and who recalls that fitting an ANN required a technique called backpropagation. The goal of this post is to refresh the reader’s knowledge of ANNs and backpropagation and to show that the latter is merely a specialised version of automatic differentiation, a tool that all Machine Learning practitioners should know about and have in their toolkit.

The problem is simple to state: we have a (highly) non-linear function, the cost function of an Artificial Neural Network (ANN), and we wish to minimize this so as to estimate the parameters / weights of the function.

In order to minimise the function, one obvious approach is to use steepest descent: start with random values for the parameters to be estimated, find the direction in which the the function decreases most quickly, step a small amount in that direction and repeat until close enough.

But we have two problems:

But this would mean evaluating our function many times and moreover we could easily get numerical errors as a result of the vagaries of floating point arithmetic.

As an alternative we could turn our algorithm or computer program into a function more recognisable as a mathematical function and then compute the differential itself as a function either by hand or by using a symbolic differentiation package. For the complicated expression which is our mathematical function, the former would be error prone and the latter could easily generate something which would be even more complex and costly to evaluate than the original expression.

The standard approach is to use a technique called backpropagation and the understanding and application of this technique forms a large part of many machine learning lecture courses.

This article is divided into

The only thing important to remember throughout is the chain rule

. More suggestively we can write

where it is understood that

Sadly I cannot recall all the sources I looked at in order to produce this article but I have made heavy use of the following.

Here is our model, with

the predicted output and

the actual output and

the weights in the

-th layer. We have concretised the transfer function as

but it is quite popular to use the 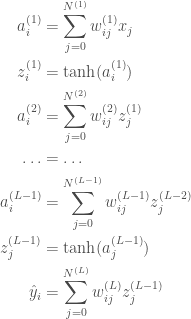 with the loss or cost function

The diagram below depicts a neural network with a single hidden layer.

for each layer is straightforward: we start with the inputs and propagate forward. In order to find the

we need to start with the outputs a propagate backwards:

For the output layer we have (since

For a hidden layer using the chain rule

For the particular activation function

. And finally we can use the partial derivatives to step in the right direction using steepest descent

is the step size aka the learning rate.

So now we have an efficient algorithm for differentiating the cost function for an ANN and thus estimating its parameters but it seems quite complex. In the introduction we alluded to other methods of differentiation. Let us examine those in a bit more detail before moving on to a general technique for differentiating programs of which backpropagation turns out to be a specialisation.

) the approximation worsens as a result of the fact that we are using floating point arithmetic. For a complex function such as one which calculates the cost function of an ANN, there is a risk that we may end up getting a poor approximation for the derivative and thus a poor estimate for the parameters of the model.

Suppose we have the following program (written in Python)

When we unroll the loop we are actually evaluating

Now suppose we want to get the differential of this function. Symbolically this would be

Typically the non-linear function that an ANN gives is much more complex than the simple function given above. Thus its derivative will correspondingly more complex and therefore expensive to compute. Moreover calculating this derivative by hand could easily introduce errors. And in order to have a computer perform the symbolic calculation we would have to encode our cost function somehow so that it is amenable to this form of manipulation.

Traditionally, forward mode is introduced first as this is considered easier to understand. We introduce reverse mode first as it can be seen to be a generalization of backpropagation.

Let us write this a data flow graph. 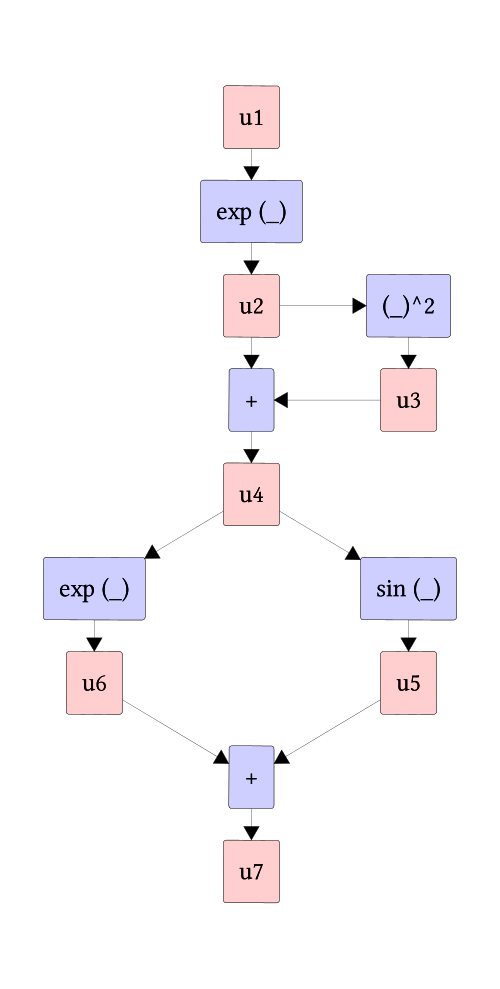 We can thus re-write our function as a sequence of simpler functions in which each function only depends on variables earlier in the sequence.

In our particular example, since

do not depend on

does not depend on

so we also have

and so the chain rule makes an explicit appearance 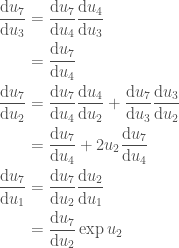 So provided we can translate our program into a call graph, we can apply this procedure to calculate the differential with the same complexity as the original program.

The pictorial representation of an ANN is effectively the data flow graph of the cost function (without the final cost calculation itself) and its differential can be calculated as just being identical to backpropagation.

An alternative method for automatic differentiation is called forward mode and has a simple implementation. Let us illustrate this using Haskell 98. The actual implementation is about 20 lines of code.

First some boilerplate declarations that need not concern us further.

Thus, for example, we have

And using the example equations above we have

Thus the derivative of

With a couple of helper functions we can implement this rule (

) by making Dual an instance of Num, Fractional and Floating.

Let us implement the rules above by declaring Dual to be an instance of Num. A Haskell class such as Num simply states that it is possible to perform a (usually) related collection of operations on any type which is declared as an instance of that class. For example, Integer and Double are both types which are instances on Num and thus one can add, multiply, etc. values of these types (but note one cannot add an Integer to a Double without first converting a value of the former to a value of the latter).

As an aside, we will never need the functions signum and abs and declare them as undefined; in a robust implementation we would specify an error if they were ever accidentally used.

We need to be able to perform division on Dual so we further declare it to be an instance of Fractional.

We want to be able to perform the same operations on Dual as we can on Float and Double. Thus we make Dual an instance of Floating which means we can now operate on values of this type as though, in some sense, they are the same as values of Float or Double (in Haskell 98 only instances for Float and Double are defined for the class Floating).

That’s all we need to do. Let us implement the function we considered earlier.

The compiler can infer its type

We know the derivative of the function and can also implement it directly in Haskell.

Now we can evaluate the function along with its automatically calculated derivative and compare that with the derivative we calculated symbolically by hand.

In order not to make this blog post too long let us apply AD to finding parameters for a simple regression. The application to ANNs is described in a previous blog post. Note that in a real application we would use the the Haskell AD and furthermore use reverse AD as in this case it would be more efficient.

and a learning rate

Now we create a function of the two parameters in our model by applying the cost function to the data. We need the (partial) derivatives of both the slope and the offset.

Now we can take use our Dual numbers to calculate the required partial derivatives and update our estimates of the parameter. We create a stream of estimates.

And we can calculate the cost of each estimate to check our algorithm converges and then take the the estimated parameters when the change in cost per iteration has reached an acceptable level.

Perhaps AD is underused because of efficiency?

It seems that the Financial Services industry is aware that AD is more efficient than current practice albeit the technique is only slowly permeating. Order of magnitude improvements have been reported.

Perhaps AD is slowly permeating into Machine Learning as well but there seem to be no easy to find benchmarks.

If it were only possible to implement automatic differentiation in Haskell then its applicability would be somewhat limited. Fortunately this is not the case and it can be used in many languages.

In general, there are three different approaches:

8 thoughts on “Backpropogation is Just Steepest Descent with Automatic Differentiation”