When I started to do this, it seemed straightforward enough: pick a problem which admitted a numerical solution, find an algorithm and code it up. I chose the problem of orbital dynamics as I had always been fascinated by the precession of the perihelion of Mercury (which is mainly caused by the pull of the other planets in the Solar System) and because this admits of at least two different methods of numerical solution both of which I hope will show the power of Haskell in this area. This led to the selection of a suitable algorithm and I read that one should prefer a symplectic method such as the Leapfrog which conserves the energy of a system (a highly desirable requirement when modelling orbital dynamics). My conscience would not let me write about such a method without being able to explain it. This led into the Hamiltonian formulation of classical mechanics, symplectic manifolds and symplectic (numerical) methods.

The reader interested in the Haskell implementations and performance comparisons (currently not with other programming languages) can read the introduction and skip to the section on performance. I apologise in advance to experts in classical mechanics, symplectic geometery and numerical analysis and can only hope I have not traduced their subjects too much.

Note that we do not make it as far the perihelion of Mercury in this article but we do simulate the planets in the outer solar system.

Forget about Newton and suppose you are told that the way to do mechanics is to write down the total energy of the system in which you are interested and then apply Hamilton’s equations.

Consider a mass of

attached to a light rod of length

which is attached to a point from which it can swing freely in a plane. Then the kinetic energy is:

and the potential energy (taking this to be 0 at

Thus the Hamiltonian is:

are the kinetic and potential energies respectively, let us set the generalized momentum

Then we can re-write the Hamiltonian as:

Differentiating the first equation with respect to time we then obtain the familiar equation describing the motion of a simple pendulum.

Now we would like to calculate the pendulum’s position and velocity at a given time. The obvious starting place is to use the explicit Euler method.

First we need some pragmas, exports (required to create the diagrams) and imports.

Some type synomyms although it is doubtful how useful these are since the generalized co-ordinates and momenta that one uses with Hamiltonian methods can have different units depending on how the physical problem is formulated.

The functions to update the position and momentum.

The explicit Euler method itself. Notice that both update functions use the previous position and momentum.

The physical data for our problem and also the step length for the numerical method.

Let’s start our pendulum at the bottom with an angular velocity that ensures we don’t go over the top.

The diagram below plots the position of the pendulum (the angle it makes with the vertical) against momentum, both axes normalised so that the maximum position and momentum are 1.0. We would expect that the trajectory would form a closed path that is traversed indefinitely as the pendulum swings back and forth. Instead we see that trajectory gradually spirals outward showing that energy is not conserved but steadily increases over time, an undesirable state of affairs.

Instead let us apply the the symplectic Euler method:

The functions to update the position and momentum.

The diagram below plots the position of the pendulum (the angle it makes with the vertical) against momentum, both axes normalised so that the maximum position and momentum are 1.0. We would expect that the trajectory would form a closed path that is traversed indefinitely as the pendulum swings back and forth. And indeed this is the case.

So in this case the energy is conserved so this looks like a good candidate for simulating orbital dynamics. But why does this work? It really looks very similar to the explicit Euler method.

Warning: some handwaving as a full and formal exposition of the theory would take much more space than can be contained in this blog article.

We can define a (symplectic) 2-form on this manifold:

Using this we can now produce a vector field from the Hamiltonian:

In order to this and without proof let us record the following fact.

be a symplectic manifold. Then there exists a bundle isomorphism

This is analagous to the isomorphism one can derive in a (semi) Riemannian manifold with the metric in some sense playing the role of the 2-form (see [@o1983semi] for example).

We assume the Hamiltonian to be a smooth function. We can form the 1-form

and we can define the Hamiltonian vector field

Thus the corresponding vector field is given by

The flow of this vector field is the solution to

In other words by using the symplectic 2-form and the Hamiltonian we have regained Hamilton’s equations.

is constant on flows of

When the Hamiltonian function represents the energy of the system being studied then this says that energy remains constant on flows. That is, as the system evolves according to the flow

given by the vector field

Thus it makes sense to look for numeric methods which maintain this invariant, that is methods which preserve the symplectic 2-form.

A diffeomorphsim between two symplectic manifolds

is a symplectomorphism if

In co-ordinates, we have

Or in matrix form

We now check that the symplectic Euler method satisfies this.

We check that this really is symplectic. First suppose we have two functions:

Then we can find partial derivatives: 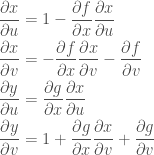 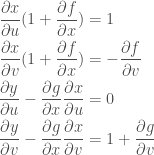 Pulling everything together in matrix form:

And a simple calculation shows that

Thus the explicit Euler method is not symplectic i.e., does not preserve areas. Thus the path traversed is not an integral curve of the Hamiltonian vector field. We can see this in the diagram: the path spirals outwards. More details and examples can be found in [@IAUS:152:407Y; @Cross:2005:SIOC].

Normally we would express the gravitational constant in SI units but to be consistent with [@hairer2010geometric] we use units in which distances are expressed in astronomical units, masses are measured relative to the sun and time is measured in earth days.

In this case it easy to see that these are the same as Newton’s laws of motion.

Each planet produces forces on every other planet so we work with 3-dimsenional arrays and explicitly set the force of a planet on itself to zero. Once the forces on each planet have been calculated, we sum them to produce a resultant force which we then use to step the momentum forward.

Using the single step udate, we can step as many times as we wish.

Sometimes we need all the intermediate steps e.g. for plotting.

Note the requirement to fill the forces array with zeros before using it.

We convert the starting positions and momenta for the planets into repa and yarr friendly representations.

Rather arbitrarily we run the outer planets for 2000 steps with a step length of 100 days.

Plotting the results, we can see that we have a simulation which, as we expect, conserves energy.

Let’s see how repa and yarr perform against each other.

And a significant speed up with yarr.

It would be interesting to compare this against a C implementation.

Appendix A: Jupiter, Earth and Sun

We need some initial conditions to start our simulation. Instead of taking real data, let’s make up something which is realistic but within our control.

Following [@Fitz:Newtonian:Dynamics] we can write Kepler’s laws as

is the period of the orbit,

is the mean angular orbital velocity,

is the major radius of the elliptical orbit (Kepler’s first law: “The orbit of every planet is an ellipse with the Sun at one of the two foci”),

is the gravitational constant and

is the mass of the sun and

is the eccentricity of a planet’s orbit.

We can calculate the mean angular orbital velocity of Jupiter:

Let us calculate the initial conditions assuming that Jupiter starts at its perihelion. The angular velocity at that point is entirely in the negative

With the Leapfrog Method we need the velocity to be half a time step before the perihelion.

to be the velocity of Jupiter at the perihelion then if

is the angle with respect to the negative y-axis at half a time step before Jupiter reaches the perihelion then the velocity of Jupiter at this point is given by simple trigonometry:
( − vpsin(δθ),  − vpcos(δθ), 0. 0) ≈ ( − vpδθ,  − vp(1 − δθ2 / 2), 0. 0)

In Haskell, we get the following initial conditions:

We can do the same for Earth but we assume the earth is at its perihelion on the opposite side of the Sun to Jupiter.

For completeness we give the Sun’s starting conditions.

Plotting the results we can see a reasonable picture for Jupiter’s and Earth’s orbits.

Appendix B: The Canonical Symplectic Form for the Cotangent Bundle

There are plenty of symplectic manifolds besides

. The cotangent bundle has a canonical symplectic 2-form and hence is a symplectic manifold.

be the projection function from the cotangent bundle to the base manifold, that is,

If we then write

We then have a closed 2-form

5 thoughts on “Planetary Simulation with Excursions in Symplectic Manifolds”